I recently attended a birthday party for a good friend of mine. I put aside my highly sensitive, introvert messages to myself (Like, ugh, people) and went because I care about her and I know she would come to mine. Her mom invited me and I  really did enjoy myself. The party was at a beautiful park on a lake. They rented out a gazebo close to the lake. Overall, it was very pleasant.

One incident stood out to me that illustrates the complete and utter arrogance of many Christians today. There was a group at the gazebo next to us called "Earth." (At least that is what the sign said.) I thought they looked cool and interesting. Immediately one person pointed out to me (in a very condescending tone) "Those people over there are worshipping Mother Earth." *eye roll I said nothing, but thought to myself "So fucking what?"

Just before we ate, everyone gathered and held hands and forced the group into a Christian prayer to thank God for the food. I awkwardly looked around in disbelief at how often I am subjected to being forced into religious rituals as an atheist. 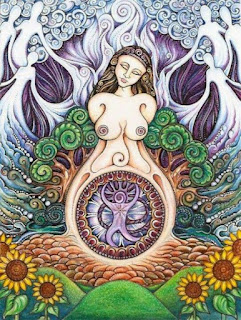 Toward the end of the party, someone else said to me, again, condescendingly, "Did you see those crazy Mother Earth worshippers over there? I was going to go over and ask them if they were worshipping Jesus" Since I don't hide my facial expressions very well, she quickly added, "I mean I didn't though." All I said was "That's good."

Why do people (and by people I mean mostly Christians) think it's ok to force their beliefs on others, but don't recognize that others have a right to believe how they want? It is the ultimate example of Christian privilege. Think about this, Christians. Think. If you were suddenly told, during a birthday party, a work event, or really, anything, that the majority of Muslims there wanted to have a prayer, how would you feel? Awkard? Appalled that they would be arrogant enough to assume you want to pray to their God? Annoyed? Well, guess what? That is how others feel when you force them into your religious rituals. If you want to be allowed to worship as you please, then you MUST allow others to do the same.


Thanks for reading. I have been on a long break working for crappy places that sucked the life out of me and I am now taking time for myself to write and relax a bit. So, you will see more blogs from me in the future. Please share!