"We are all atheists about most of the gods that humanity has ever believed in. [Zeus, Apollo, Hermes etc…] Some of us just go one god further." Richard Dawkins


When I was a teenager, I was very sheltered in my limited Christian world. I went to church Sunday morning, Sunday night, Wednesday night, Thursday night (For visitation; another word for harassing people and trying to get them to come to church). I went to the school that was part of the church, every night we had “devotions,” we prayed before we went to bed and we did not have friends who were not part of the church and school. The only exposure to the outside world we had was when we went to the store, or visited “unsaved” family. 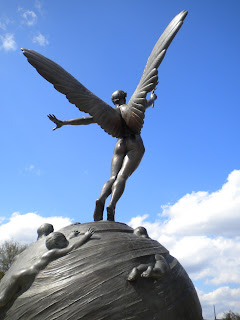 The summer I turned eighteen our family took a trip to Massachusetts to see my dad’s side of the family. It turned out to be the last time my dad saw his father. We were having a good time: I played with my cousins (“unsaved” of course) we swam in the lake near their house and we got to see family we didn’t even know we had. We were there for about two days when I heard my dad and his dad in an argument. The argument went something like this: (very simplified version coming from my memory at eighteen, so it could be a bit flawed)

After some yelling back and forth, my dad told us all to pack our bags and get ready to leave. It was very disappointing to leave early! My dad was angry for a very, very long time and I remember we tried really hard not to annoy him on the drive home. I felt his anger was like a time bomb.

I remember thinking that my cousins were cool and nice people. I remember my aunt telling me she felt sorry for me that I was so sheltered, and I agreed with her. But mostly, I remember thinking: Why the heck are they going to hell? What made us so much better than they were? Were we being a bit arrogant and mean-spirited?

Most of them were catholics, and my parents belief was that anyone who does not believe the way they do is going to hell. I really started thinking about this. What made my parents think that my cousins and grandparents were going to hell? I could see that my parents did not know everything, obviously at age eighteen I thought I did. (haha) I did not dwell on this thought much, but it was there, swimming around in my thoughts, along with all the other ones. As the years went by I could not reconcile these thoughts. Wasn't I a disbeliever of Allah? And didn't they talk about how wrong we were? So I was an Allah atheist! (haha)

Didn’t the crazy people who flew planes into the Twin Towers on 9/11 believe that their religion was the only right one? Didn’t the pope feel strongly that catholics had the religion thing down pat? What about Jews? What about people who had a different doctrine than the one my parent’s church had? I started to wonder why they ALL felt they were right and EVERYONE else was wrong. There was something wrong with that! The more evil I saw coming from the church, the more I was convinced. They were all wrong! All of them! Not one of them had the right and true religion/god!

Of the main churches we attended growing up we had one pastor burn down the church to get insurance money, one who went to jail for molesting young girls (I was one of them) and one who died in prison while awaiting his trial for molesting who knows how many kids. I saw Ted Haggard fall from grace (a man who was so hateful toward gays and then had sex with a male prostitute) I saw Jim and Tammy Bakker fall off their god pedestal and I I saw so many hypocrites in the churches I attended that I knew christianity was not going to work for me.

I remember being told how silly the stories were that other religions told about the story of creation. Then I began to think that ours was pretty unbelievable too. Watch this funny video by a very funny youtube atheist comedian to put the creation story in perspective

The thing that bothered me the most was when Baptists would say that anyone who did not believe in [their] god was going to hell. If you asked for details, this meant innocent children, people in the jungles of Africa who had never heard of their god ( I was told this was why it was necessary to send missionaries out to save the lost souls) and, as I said, catholics, methoists, muslims etc… What kind of god would send innocent people to hell because they did not get to read “his” bible in their lifetime? Not the kind of god I wanted to worship anymore! I remember when my Papa died my parents said he was probably in hell. This was disturbing to me. Would god really let a person die in a lake of burning fire for eternity because he did not worship an unseen, unproven, useless god who had never done a damn thing for him or his family? Who would want a god like that? Who would be gleefully happy and smug knowing someone was in hell? Who would choose to spend their life worshipping this god? I knew I did not want to waste my life like that!

As this video by The non-stamp collector shows, no god is the right one. The concept of god is wrong. Religion is wrong and people who force it down the throats of others are wrong!

If you have a respectful comment, I would love to hear from you! I welcome all points of view. I do not welcome hate or disrepect and those kinds of coments will be deleted!
I LOVE getting comments, it makes my day! Thanks!!
at March 19, 2010