Christians and Sex- One More Reason to Run!

*This post is about sex and some sexual practices. If you are easily offended, consider yourself warned. When I speak of sex here, I am talking about mutual sex between consenting individuals who are old enough and mature enough for sex!
I have never understood the obsession that Christians had/have with sex (well, really the fear of it). I mean, if you use their reasoning, (which I don’t, but let’s try it for a minute) God made humans in his image. God is perfect and does not make mistakes. So, the way we are is the way “god” made us, right? Okay. So, god created us needing sex. All humans crave sex when they hit puberty (at least most) and I think it is pretty natural for humans to want to fulfill their cravings for sex as much as they need to eat, sleep, and drink water. Right? So why do Christians have so many hang-ups about sex? It seems that sex, homosexuality, premarital sex etc…are on their list of “serious sins.”

When I was a teenager I was not really allowed to talk to a person of the opposite sex, and I especially could not be alone with them. I guess my parents knew that if I was alone with a boy/man that I would try things like kissing and stuff. But really, what harm was there in me kissing my boyfriend when I was age 17? Why was it seen as so evil? I felt that if my parents found out I was kissing (not to mention other things) I would be kept in the house until I was 35. So, it had to be kept very secret.

Human touch, kissing, hugging and sex are very pleasurable and we NEED them! Demonizing our sexual desires and making teens (and adults) feel bad for craving sex will only set them up for sexual dysfunction later! We should be concentrating our efforts on teaching teens to respect their bodies, use protection, be respectful of others, and being safe. Isn’t that more important? 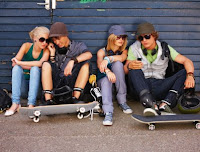 Along these lines is the stupidity with many Christians who say that being gay is wrong and a choice. Let’s use the “Christian” logic again. God made us in his image. God is perfect. God made us with a sex drive. We are sometimes sexually attracted to the opposite sex, the same sex, or both. Yay god! Where is the problem?

The problem sets in when religious leaders preach and push their own sexual repression and dysfunction from the pulpit and all the sheep followers begin to think of sexuality as an evil that needs to be avoided. However, somewhere inside them, they feel ashamed because they love sex. They lust after people and they get excited when they see the human body. They take this shame and guilt and push this belief onto their kids and people in their church. I guess if they can’t feel good about their sex drive, no one should. As I have mentioned before, I think a big problem with Christian preachers (and others) is that they repress their own desires- often for people of the same sex- *shock- and this turns into a hatred of the LGBT community. Why? Because they hate THEMSELVES!

What does this do? It makes people feel ashamed when they feel good. It makes people feel like freaks when they are attracted to the same sex! It causes teenagers to try to have sex before they are ready, keeps them from talking to their parents, and may keep them in the dark about the protections that are available to them. Why would loving parents do this to their children? All in the name of god.

No wonder I ran from Christianity! Who wants to stick around for that kind of abuse when you find yourself attracted to someone of the same sex? I prefer to be around people who love and accept me the way I am!

Let’s teach our teens that sex is natural and good and fun! Let’s teach them to listen to their instincts and respect their body and others’ bodies too! Let’s teach our kids that sex (when they are old enough and mentally ready) is part of life and love and goes with being human!

Question for all you LGBT haters out there? At what point in your life did you choose to be heterosexual? Think hard now! Watch this video!