I just finished the book “WHY ARE YOU ATHEISTS SO ANGRY? 99 Things That Piss off the Godless.”By Greta Christina. I was inspired to keep writing in my blog and to keep talking about my lack of belief and let others know the reasons I am ANGRY too! This book made me feel justified in my anger. As most readers of my blog know, I have dealt with a lot of anger in the process of writing this blog and coming to terms with the fact that I no longer believe in a god. Of any kind.

As I read Greta Christina’s book I realized that I have not been vocal enough yet about my feelings toward religion and the harm it does to people. So, even though I may be repeating things that other atheists already say so well, like Greta Christina, I still need to say them too! So I will continue to blog!

Here are the thoughts I have about the book: 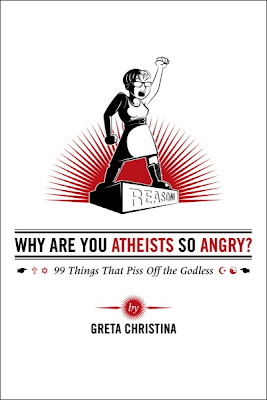 1) I don’t need to feel guilty anymore that I have a lot of anger toward churches, religion and the way I was raised. I can take this anger and channel it toward something useful. I can let others know how harmful religion can be. Great Christina points out that this anger is justified- and I agree- and says that we should use this anger to, in her words, “become a political force to be reckoned with.”

2) My anger will help me to be more active in other social movements as well. Like LGBT, feminism, race issues, women’s reproductive rights, etc…

3) I realized reading this book that I do NOT want to be one of the kinds of Atheists who are just like the fundamentalists and take a drastic approach and not allow people the right to free speech and a voice for their beliefs. I am going to try to be a more respectful person when I debate people. I find that Greta Christina is very convincing, in a very respectful way.

4) I am not an intolerant person when I voice my views against religion! I have been told this so much that I was starting to believe it! If someone says, “There is a magic sky daddy and he is my heavenly father and my family and you are hurting me for not believing in him” (well, maybe not those words, exactly, but someone said this to me on Facebook recently) I can say back to them, “Prove it! If you have an extraordinary claim, YOU have the burden of proof, not me!” People, please stop asking ME to prove that there is no god. If you claim there is one, you have the burden of proof. Great Christina says so! Also, when people tell me things like, “You have no absolute basis for morality without God, The Bible or religion, I can tell them that I AM a moral and ethical person and I am an atheist! I will also continue to do awesome things and show people that atheists ROCK!! Anyone who knows me knows I am a very compassionate, kind and helpful person who does far more good in the world than some conservative Christians who sit on their asses and judge me. I can work circles around them all! (Ha!)

Exactly! Thanks for always saying it so very well Greta Christina! 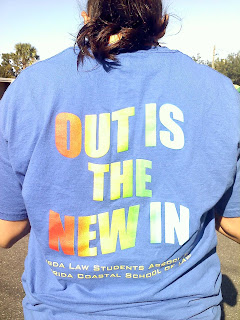 Here is my own personal list of top 10 reasons I am ANGRY.

1) I am angry that women are being taught by their church leaders every day that they are “less than” and are beneath men simply because they have a vagina. Grrr

2) I am angry when I think about children in my life that I love and adore being told they will go to hell and burn in the lake of fire forever if they don’t believe in the Christian God.

3) I am angry that the principal at Clay Hill Elementary School (Right down the street from our house) thinks it is okay to allow a local pastor to come on public school property and ask kids and parents to meet him at the flagpole for prayers. This is a clear violation of the separation of church and state. If these people were Buddhist and wanted to lead prayers at the flag pole these very same people would pitch a HUGE FIT. Details of story here
4) I get angry when people tell me there is no way I can be a moral and ethical person. Some of these people KNOW me and know that I AM a moral and ethical person!!

5) I get angry when I find out that my ex-girlfriend’s mom said that she would never allow an atheist into her home- like we are some kind of demon or something.

6) I am angry that I calmly read Christian Bible verses and religious crap all day on Facebook and either ignore it or hide it because I love the people who post it. But when I want to post something about my atheism or being bisexual, I get told I should not put that on Facebook, or that I should focus on other things, or that I should consider giving their “god” a chance. Blah blah blah They have a right to say it. I have a right to get angry and say what I want back on MY FACEBOOK PAGE DAMN IT!

7) I am angry that I feel cut off from my parents and some siblings because I don’t believe in their god/religion. I miss feeling close to my mom and dad.

8) I get angry when I hear people use the Bible to hand pick verses that justify their hatred of LGBT people. I would rather hear someone say they hate gay people than to hear them say, I love the sinner and hate the sin kind of bull shit that comes out of the mouths of so-called “Christ-followers.” (p.s. either way, I get angry lol)

9) I am angry that for the longest time, I have felt guilty about sex, and have had a difficult time coming to terms with my sexuality simply because I was raised to be ashamed of my body, to hide my body and to feel like I need to cover my body.

10) I get angry when I realize that I live in the Bible Belt and there are not many people who live around me that feel this way. Or are there? Come out!!!

If you have not read Greta Christina's  book, buy it today! It is so well worth the read and I am going to keep it on my Kindle on my iPhone so that when I get into a religious debate, I can whip out that book and say, “Well, Greta Christina says….” SO THERE!!

Here is a link to a video introduction of the book.


By the way, I am aware I  have other "angry" lists and a blog about my anger. I wanted to write another one. Just call this blog my angry rant update.