The following letter to the editor was printed in our local Folio Weekly August 14, 2012 edition.

First, let me congratulate you on becoming the new editor of Folio Weekly. I’m sure you’re finding it exciting and most challenging as well.
Anne Schindler’s spark will also be missed, I’m sure. I appreciate seeing my testy opinion letters appearing for reader reaction from time to time among a sea of differing views. As you stated, the president and chief operating officer of Chick-Fil l-A, Dan Cathy, offended the gay community by expressing
his biblical stance on marriage [Editor’s Note,
July 31]. However, as I see it, his words in that
Atlanta radio interview express exactly what
mainstream Christianity believes. God’s way
always leads to a happier and healthier lifestyle
with a better ultimate outcome.
I can’t believe that the highly respected
John Delaney, UNF president and former
Jacksonville mayor, would write a letter to
The Florida Times-Union “supporting the
gay rights ordinance based on the teachings

of Jesus.” What kind of Bible and strange
teachings of Jesus is Delaney referring to?
Certainly not found in my King James Version!
[The destruction of] Sodom and
Gomorrah was merely a fireworks display
compared to what we’re provoking the
Almighty to do. God has said, “I will tread
them in mine anger, and trample them in
my fury … for the day of vengeance is in my
heart, and the year of my redeemed is come”
(Isaiah 63:3&4). In the meantime, I’ll be
among the thousands enjoying Chick-Fil-A
nuggets. Hope to see you there sometime,
where God is always smiling.
William H. Shuttleworth
Jacksonville 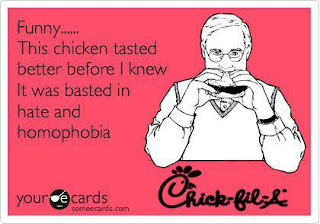 Not- so- Dear William Shuttlebutt:

I am shocked and sad that you could actually think/believe that your “mainstream Christianity” is so mainstream that you could write something like this to a local paper and expect that everyone believes the same way that you do! Your letter is so full of contradictions and stupidity that I hardly know where to begin!
First of all: Although this may come as a shock to you, not everyone is a Christian. Not everyone believes the crazy irrational way that you do. There are many different religions and views in this country, in our world, and even in little old Jacksonville, Florida. Just because a few idiots at your church agree with your bigoted, narrow-minded views does not mean that everyone does!

Second of all: How do you believe (and try to force the rest of us to as well) that a god who is willing to “trample in his fury” [you imply anyone who is gay] is also a fair and just god and who is “always smiling” on people because they choose to eat greasy chicken from a chain restaurant whose owner uses his ignorance and stupidity to bring in business is anything close to fair or Christ-like? 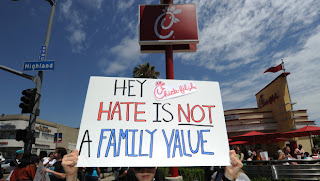 Third: Although I do not share the religious or political views of John Delaney (most of the time) I can tell you that he is right in this case. You don’t have the right to twist and interpret [your] bible to make sure it lines up with your ignorance, hate and lack of love for others. In fact, if you were following the teachings of Christ, you would not support a man or his business who so obviously hates a group of people simply for being who they are. It is not “strange” to want equal rights for all people. It is strange to think you can speak for Jesus (who never said a word against LGBT people if you read your holy book) and it is strange that you feel so strongly about this that they only way you can make  a stand for your odd views is by continuing to eat greasy chicken and write to the paper about how right you feel you are. Do you not see how stupid, bigoted, angry, hateful, judgmental and hypocritical you sound? Not sure your Christ (if he existed at all) would approve of your attitude! You can take your "healthier and happier lifestyle" and shove it!

Sincerely,
Lori ( a bisexual atheist who believes in equal rights for all people, whether you like them or not.) Rachel Maddow said it best! Equal rights should be automatically granted to all people. Our right to live freely and share the same privileges of heterosexual couples should not be up for vote by bigoted, homophobic haters who hide behind their holy book and have no idea how ignorant they are to people who use their brains.

It is sad and lonely living in a place that would vote down a SIMPLE bill allowing LGBT people to avoid discrimination.