Come on Down; God is Waiting!

As a child, and later as a teen, I always wondered why the pastor of the church always had to have an "altar call." In case you aren't familiar with the term, this is a time at the end of the sermon, when the congregation sings songs like "Just as I am" and other really boring songs to convince the unsaved sinners in the audience to come forward and accept Christ "into their hearts."

It was usually at around 12:30 or 1:00 in the afternoon when people were hungry (I once heard a pastor say, jokingly, (?) that it did not matter if your roast was burning in the oven at home, God calling "sheep into his fold" was much more important than that roast- or, presumably, our house if it burned down? lol) babies were tired, kids were weary of sitting still and the pastor had already said what he wanted to say about a million different ways. But often he would order the congregation (standing) to sing over and over and over!


This is what was usually going through my mind:


From about age 9-14 Why is he doing this? Isn't everyone here already "saved?" I am so hungry. I wonder if mom and dad are going to let us go out to eat today. lol


From age 14-19 Is he seriously going to make us stand here and sing again? I wonder if I really am a Christian, I don't feel like one. I would not walk down that aisle in front of all of these people if the devil held a pitchfork to my head. One more verse? Wow! Oh my god [insert person's name] walked up there? Are they nuts? Wow, they are so weird. Maybe they just need attention. Does saying a prayer really get me in to heaven? Why don't I feel any different? Am I the only person in this church who thinks that this is so redundant and crazy? I am so hungry! Didn't God make us hungry so we would eat? If God wanted us to come to him, why does the pastor have to beg and plead? 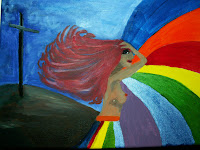 One pastor we had would say something if you got up and left, (ie... God is calling people here, so show some respect and please sit down). My mom, who was nursing a baby, was terrified to go nurse her baby because she did not want to be chastised in front of the church. Apparently God thought people walking up the aisle was more important than feeding a baby.

I don't want to sound mean or anything, but seriously, my final thoughts and conclusions about church, Baptist preachers and religion was that this shit had more to do with PEOPLE feeling good about themselves (ie.... "We led 4 people to god in church today, bless god!") than it was about showing people a better way to live. Because, really, if this religion (at least the one that I was in) excludes certain kinds of people (like gays or lesbians) then were they really all that "moral?" The way I saw it (back then- and now- only I don't believe there is a god anymore) is if God said to love others, I was pretty sure he meant everyone: Rich, poor, prostitutes, people living with someone- even though they were not married, women who wore shorts, men with long hair, bisexuals, gays, lesbians, Catholics, people who used drugs, people who drank alcohol, people who had pre-marital sex, people who listened to rock music, people who did not go to church, people of other religions (crap this list could go on for so long listing the people who "Christians" that I associated with thought were not going to heaven) etc... So, why did these people who claimed to love God, make so many people feel like so badly about themselves?

These thoughts eventually led me to others, and I found I could no longer hold on to these beliefs and be a rational, moral person. Most of the time, Christians are the most judgemental people I know. They judge people based on their religion (any other than theirs) their sexual orientation, the way they dress, how often they attend church, how often they read the Bible and on and on. It seems to me that this is no one's place to judge other fellow humans.

I would love to hear what you were thinking during alter call at your church. Am I the only one thinking these things? What do you think?