As you can see from my blog, there are many, many things that turned me off to Christianity and religion in general. This blog is about the ignorant things that “men of god” have said that made me want to run fast and far from any organized religion. I will just include a few quotes and my comments about them.

Okay, Do I really need to comment on this? No, but I will. The day Jerry Falwell died I did a happy dance. How can you call yourself anything close to moral and say something so horrible about your fellow humans? Jerry, why did you care who someone loved and showed love for in the privacy of their bedroom? And one more thing… What kind of “just” god would create humans the way they are (some of us are gay, deal with it!) and then give them AIDS to punish them for being the way he created them? Have you thought about that Jerry? No? You can’t because you are dead? Oh damn! 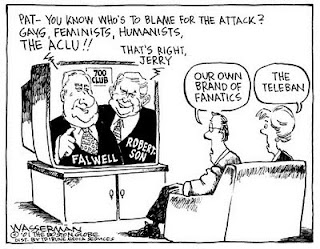 "The idea that religion and politics don't mix was invented by the Devil to keep Christians from running their own country." Jerry Falwell

Ignorant ass! You are a perfect example of why religion and politics should not mix! Not everyone in the U.S. is a Christian and it is arrogant to assume that this is your country! How would you feel if a Muslim or Catholic said the same kind of thing? Scared? Controlled? Worried for the future of your country?

"Rail as they will about 'discrimination,' women are simply not endowed by nature with the same measures of single-minded ambition and the will to succeed in the fiercely competitive world of Western capitalism."
--Pat Buchanan (11/22/83)


"Just like what Nazi Germany did to the Jews, so liberal America is now doing to the evangelical Christians. It's no different. It is the same thing. It is happening all over again. It is the Democratic Congress, the liberal-based media and the homosexuals who want to destroy the Christians. Wholesale abuse and discrimination and the worst bigotry directed toward any group in America today. More terrible than anything suffered by any minority in history." –Pat Robertson

Mr. Robertson, how the hell can you think you are a persecuted group similar to the Jews? And what could homosexuals possibly do to YOU and other Christians to destroy them? Do you have so little faith in your god that you think he will allow the homos to hurt ya? You are a sad excuse for a human. You calling yourself a minority while you rake in millions every year from your sheep followers would definitely NOT put you in the minority group you ass clown!

So, as you can see by my comments. I don’t deal well with ignorant people who hate others simply because they choose a different religion from theirs. Why would I want to follow a religion that is controlled and run by fools like this? There is so much hate and discontent in the Christian community right now that I am shocked that some people stay as long as they do. I feel free and happy to be out of all the hate and control. I only wish that the people I love would see it.

P.S. Before you comment, please know that I understand that ALL Christians are not like Jerry and Pat. This blog is my therapy and my way of explaining why I am not a follower of Christianity. 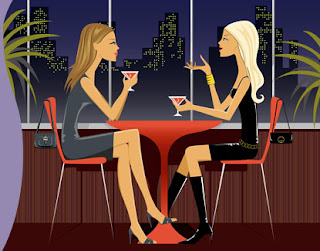