Not a Happy Camper

Most kids like it when you mention summer camp. Right? My son went to camp for two different summers and attends Boy Scout Camp sometimes and he really seems to like it. When I hear about camp, I inwardly cringe and have to keep my negative camp views to myself. Why? Because camp, for me as a teenager, was nothing but an anti-woman brainwashing session.

My most vivid memory of my Christian camp experiences is not of me cruising the lake in a canoe or falling in love with the cutest boys. Nope. I actually remember that I felt TORTURED that we had to attend a “church” meeting every day 3 times a day. How boring! Girls sat on one side of the outside (i.e... miserably hot in Florida) auditorium and boys sat on the other. (I guess they thought there would be too much temptation if we sat next to one another?). Many times we were broken into groups. The girls would go listen to a woman talk and the boys would hear a man.

The one session that stands out in my memory the most is one that was called something like “Women of God.” We were told that we were to save ourselves for our future husbands. We then talked about what a good woman of God does. Here is what I remember:

1) You should remain pure until God’s choice finds you and asks you to marry him. 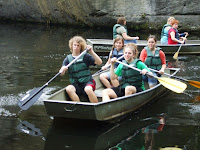 2) After you get married, you should always strive to make your husband happy. He is the head of the household and he makes the rules. You follow his lead.

3) When you wake up in the morning, the first thing you should do is get dressed, smell nice and put on makeup for your husband. He deserves a woman who does not “let herself go.”

4) You should plan good meals and find out what your husband likes.

5) Limit time with girlfriends and others who will take time away from your husband.

6) We should always aim to be pure in actions and dress. Always dress modestly! (Which meant, as I said from other blogs, dresses or “Culottes.”)

7) Never argue with your husband. When he makes a decision, you should back him up with a smile on your face. 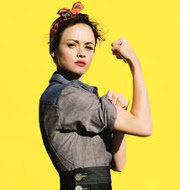 Well, I could go on for a while, but I think you get the idea. We were supposed to turn into Stepford Wives and become robots for God. I remember thinking at age seventeen while I sat there at camp… Wouldn’t my husband love me even if I did not wear makeup? I honestly got stressed out and wondered if I would be able to keep a man happy if I changed, gained weight, forgot my makeup or neglected to make dinner.

As time went on, I began to become bitter about these camp lessons. (Which were also reinforced in church and Sunday school as well)

Here is what these lessons failed to consider:

2) What about my happiness? Shouldn’t our relationship be a mutual respect for one another?

3) If my husband loved me, he would not care if I was wearing makeup.

4) Both people should cook and care for the house. Why was I a housemaid? Because I had a vagina? Grrr

5) Not having a relationship with other people outside of my relationship felt like torture and solitary confinement.

6) Men in religious “cult-like” churches always worry so much about what “their” women wear. The only conclusion I had for this was that they had personal problems with lust and did not want the women to “tempt” them by wearing something that actually showed they had a shape.

7) If a woman is told to not argue with her husband and that he is always right, where will she ever gain confidence in who she is as a person? What if he is abusive? What if he is an alcoholic? (as my first husband was) What if he is just a control freak jerk? Why should a woman “submit” to a man like that?

8) What about what SHE wants? What if she wants to be a lawyer, a doctor, a teacher, a military pilot, or a bank executive? Why are the woman’s needs not considered?

9) Okay, I know this one is obvious, since if you know me at all you know I am in a relationship with a woman…but what if we don’t want to be with a man? Then what?

I raised my daughters completely opposite from any of this bullshit and I am glad to say that they are both very intelligent, kind, loving women who have a voice, an opinion and their own mind. I would rather have had them be a bit on the “sassy” side growing up, knowing they have a voice and their own identity.

I am also raising my son to respect women and to know that they are his EQUAL, not beneath him. He calls me a “Femi-Nazi,” which annoys me, but I would rather have that label than one in which I am subservient to men. I tell him that a feminist is a woman who wants EQUAL treatment. Nothing more. Nothing less!

The problem with Christianity and most religions is that they fail to see the worth of women. They fail to raise their daughters to believe that they are special and worthy of equal treatment. This kind of message tells girls and young women that they don’t deserve anything good, that they should settle for the first schmuck that comes their way, and that their lives are to be controlled by others. I don’t know about you, but that is NOT what I want for my daughters, or anyone else’s’ for that matter. Christianity, to me, was mostly anti-woman! As time went on, the messages that they tried to put in my head began to change. I realized my worth and I began to see my life as a better place without religion.
at March 21, 2011