So, listen up Bible thumpers! You can't pick and choose what you want to follow from the Bible. Either you follow all of it or none of it.

Personally, I think the bible is a book written by a bunch of racist, slave-keeping, sexist, men. But, if you want to believe it and follow it like it is some god-ordained book, that is your business, but don't be a hypocrite. If you want to take Leviticus 18:22 ("You shall not lie with a male as one lies with a female; it is an abomination") as the holy, spoken word of god, then take everything else in the old testament as god's word too.

This article says it better than I could. The point of the article is that people are being ignorant to take one tiny verse from the bible and use it as the basis for their entire belief system. If you eat any kind of meat that comes from a pig (which I know damn well a lot of you ignorant redneck, "god-fearing" people do) then YOU should be treated the same way you treat gay people; at least according to your precious book.

Who gave you the authority to only pick verses that back up your homophobic tendencies? Why is it more wrong to be homosexual than it is to wear polyester? If you took a minute to THINK FOR YOURSELVES and really look into things, you would realize that you are being hateful, hypocritical, arrogant, and just plain stupid to hate someone for how they are from birth. You are also extremely ignorant to follow a book that depicts your god as a murderer. You sit there and tell your children stories about how god wiped out the entire earth and killed everyone on it and let Noah and his family live. You tell your kids this story like it is a good story. If you really thought about this story you would realize it is a terrible story to tell a child? Some of the bible stories people tell their children are just downright disturbing, but because they come from the bible, they are okay? THINK! 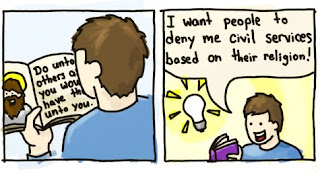 The same people who stand in the pulpit and preach against being gay are the very ones who would never let their children make fun of someone who has black hair, blue eyes, dimples, gray hair, freckles, glasses or anything else that can’t be changed. Why do you teach your children (or congregation) that people who are gay are going to hell?


This week, I found out just how sad it can be to be treated as an outcast in your own family. My girlfriend invited both of my sisters over for dinner at our house the day after x-mas. She also sent them a friend request on Facebook. Neither responded to her or accepted her friend request. One sister wrote to me and told me that they had to do what was best for their children and hoped that there were no “hard feelings” about it. Then said she would love to see me and my kids (but did not mention my girlfriend). Apparently, my parents are not inviting my girlfriend over for x-mas; just me and the kids. Well, I will not accept that kind of hatred from my family. If they can’t invite my partner, then they are going to miss out on our company.

How any family can be so hateful and mean-spirited to their own daughter/sister is beyond my understanding. My kids are welcome to go over there, but I am NOT going. If it is more important for them to be "right" and to hold on so tightly to something so obviously ridiculous, then they deserve to be sad. They deserve to miss out on having me and Catherine in their lives.

It is so disturbing to hear my sister say she has to do what is best for her family. What the hell does she think I am going to do? Talk about my lesbian sex life with her kids? WTF? I have never been anything but kind, loving, accepting and understanding to my sisters and would do just about anything for them or their kids. I would protect their kids with my own life. I have raised my own kids and have done a decent job at protecting them and teaching them about life. THANK GOODNESS I was smart enough to raise my kids not to hate and discriminate against other people.

I have honestly never felt so hurt and sad in my entire life. Being rejected by your family is really, really painful. I know I need to move on. They are never going to change or accept the fact that I am in love with someone who has a vagina, rather than a penis. Just WOW!

Why am I no longer a Christian? Exactly because of bullshit like this!
at December 19, 2010